Parliaments in the Soviet Occupation Zone/GDR

Mentioning »parliament« and the »GDR« in the same sentence appears to be a contradiction in terms. It is true that, from 1950, the Eastern German state did have a pro forma parliament. According to the GDR constitution, the Volkskammer was the highest body of the state. However, it was in session only two or three times a year, its members were volunteers rather than democratically elected and there was no separation of powers. While the existence of the so-called bloc parties and mass organisations feigned plurality, »coordination« (Gleichschaltung) under the SED prevailed. The parliaments at state level, newly established immediately after the war, were, as early as 1952, also dissolved.

The 10th Volkskammer of the GDR was a unique and unusual parliament. In spring 1990, the first and, at the same time, the last freely elected parliament of the GDR contributed to the reunification of the two German states that had been facing each other for more than four decades during the Cold War. This task had to be accomplished by parliamentary representatives who had no experience of the working methods and processes of the parliamentary system. 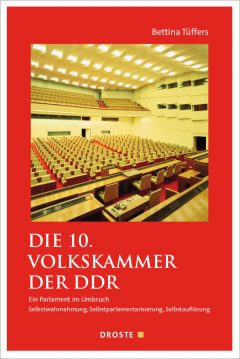 Therefore, the projects of the research focus »Parliaments and Political Parties in the Soviet Occupation Zone/GDR and in the New German Länder« concentrate on two periods of transformation: first, the parliamentary beginnings in the Soviet occupation zone/GDR between 1945 and 1952 – the watershed between democracy and dictatorship – and thus the political framework of the emerging »people’s democracy« in a centralised society; and second, the transition from the SED regime to parliamentary democracy in 1989/90. After the first free democratic elections in the GDR in March 1990, the Volkskammer experienced a process of rapid self-democratisation. After October 1990, its members often served as multipliers of parliamentary work, contributing the experiences and ideas they gained during their time in the Volkskammer to the new state and municipal parliaments. An ongoing project explores the formation of the pluralistic party landscape in the new German Länder after 1990, using the example of the DSU, particularly regarding the influence of the West German sister party CSU during this process.