Marie-Luise Recker’s handbook »Parliamentarianism in the Federal Republic of Germany: The German Bundestag, 1949-1969« is now in its second unrevised paperback edition. The book explores the role of the German Bundestag during the first two decades of the Federal Republic of Germany. It analyses the operation and working methods of the West German parliament as a legislative body that also puts the government under scrutiny, shows government and opposition parliamentary groups working both together and against each other and illustrates the lifeworld of the members of the Bundestag.

The author presents a confident parliament that was increasingly able to gain leeway from the chancellor and cabinet. Recker corrects the common misconception of a »chancellor democracy«, showing the members of the Bundestag as independent political actors. In doing so, she sheds new light on the political culture of the Federal Republic of Germany and the German Bundestag that has substantially contributed to the emergence of a liberal and democratic polity. 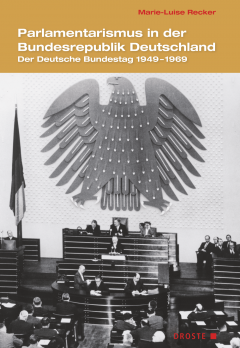