How did Germans and Italians after 1945 connect with representative democracy? The book addresses this question, for the first time, from a historical perspective, illustrating voters’ perceptions and interpretations. It focuses on urban everyday life of the Federal Republic and Italy, where politics was publicly observed, presented and discussed. Particularly in the context of election campaigns, voters and parties negotiated what constituted good political representation. The book explores the relationship between the democratic sovereign and its representatives through the lens of direct communication. It highlights the expectations of the people’s representatives, parliamentary elites’ views of the electorate and the extent of closeness between both of them that could increase and decline.

The book covers the period from the post-war decade to the boom period in the 1970s, looking at changes in the relationship between voters and elected representatives. It investigates social and political factors of successful communication and the conditions that facilitated the approval of German and Italian people to representative democracy. In doing so, the significance of both the local in media society and post-fascist voters’ understanding of political participation come to the fore. It turns out that this part of the electorate has faced parties and members of parliament in a confident manner much earlier than previously thought.

Comparing German and Italian cities and their respective political communication culture illustrates why Italy and the Federal Republic became democracies in their own right. The book illuminates the different effects of experiences of war and dictatorship, social change and protest, society and perception of crisis on the functioning of representative democracies. At the same time, it outlines the period of a »voters’ democracy« that emerged transnationally and came to an end in the 1970s. 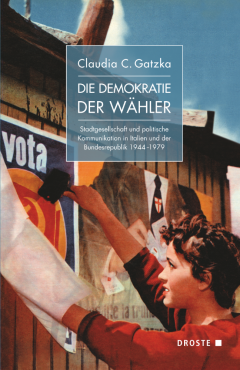