The 1970s and early 1980s play a crucial role in the history of the CSU. Gaining more than 60 percent in some federal and state elections, the CSU turned into an almost hegemonic political power in the Free State of Bavaria. Its strong base in Bavaria also strengthened the political weight of the CSU in the parliamentary association with the CDU in the Bundestag und underlined its demand for participation in national questions. At the same time, the CDU/CSU’s departure from federal government revealed fissures between the two Union parties. Spurred by its exceptional election victories in Bavaria, the CSU state group saw itself as the »spearhead of the opposition« to which the less successful CDU state parties had to subordinate themselves.

The edition of the minutes of the CSU state parliamentary group from 1972 to 1983 makes crucial source material on the history of the Federal Republic of Germany accessible. The minutes shed light on the parliamentary work of a central actor of the political opposition in the Bundestag, allowing for the precise reconstruction of important decisions in the political arena. In particular, they reveal strategic disagreements with the »big sister« CDU that culminated at a closed meeting of the state parliamentary group in Wildbach Kreuth in 1976, with the decision to separate from the CDU. 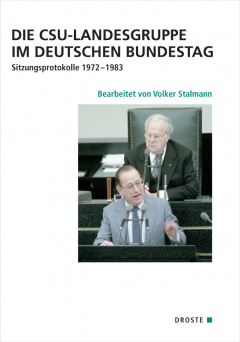