The proceedings of the Committee on Foreign Affairs of the 9th session illustrate the foreign political developments in the early 1980s. The minutes of the committee’s proceedings are an excellent source on German foreign politics. At the same time, they shed light on the internal structure of the Bundestag.

The members of the committee addressed, among other things, NATO’s dual track decision from December 1979 and related domestic debates. They frequently discussed the future of East-West relations and international conflicts, including the Argentina-British conflict over the Falkland Islands. Regarding Europe, the committee looked, for instance, into agrarian political reform and the negotiations on the contributions to the EC budget. The committee’s most important contact partner was Foreign Secretary Genscher, who attended a third of the meetings. The minutes reveal how the CDU/CSU parliamentary group prepared in the committee for the coalition change of the FDP: they praised and agreed with the politics of the foreign secretary. 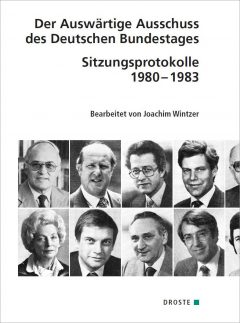